You don’t mean to step all over golf’s hallowed rule book, but then you probably didn’t mean to run that Stop sign either. Here’s Golf for Women’s list of the rules that golfers breach with alarming regularity:

Understanding the USGA Rules of Golf is no gimme. But at the risk of sounding like your sixth-grade homeroom teacher, we’ll also remind you that golfers are expected to know and abide by them. Failing to do so increases your chances of being DQ’d at the next member-guest tournament. And if you plan to record your score for an official handicap, any rules breaches will undermine the integrity of your handicap. Here are some not-so-simple rules that average golfers break all the time.

1. You hit a provisional when your ball most likely landed in a water hazard.

The Rule: 27-2: If a ball may be lost outside a water hazard (including a lateral water hazard) or may be out-of-bounds, to save time a player may play another ball provisionally.

The Translation: You cannot play a provisional ball solely because you believe the original ball might be lost in a water hazard. If you do, the second ball is not a provisional; it is in play and you incur a stroke penalty. Under the water hazard rule, you can hit from the original spot. But once you do, that ball is in play and you cannot elect to drop near the hazard. In other words, you can’t re-tee and then decide what works best for you. And if you find your original ball outside of the hazard line, pick it up.

2. You ask for or give advice.

The Translation: Golfers love to share: “How far am I?” “It looks like a 6 iron, but I’d hit a 5 iron with this wind.” “Does this putt break right over the ridge?” Sound familiar? We thought so. But offering or asking for any advice that could affect the way a player executes a shot (a.k.a. “Dear Abby golf”) is against the rules unless it comes from a caddie or partner. Keep your swing tips to yourself, and if you want the line on that 15-footer, pay close attention to the break of someone else’s putt. (Note: The USGA has ruled that sharing general knowledge information is acceptable. For example, asking, “Is the flagstick in the front or back of the green?” is okay because the pin’s location is public knowledge.)

The Penalty: Assess yourself two strokes for each offense and loss of hole in a match. 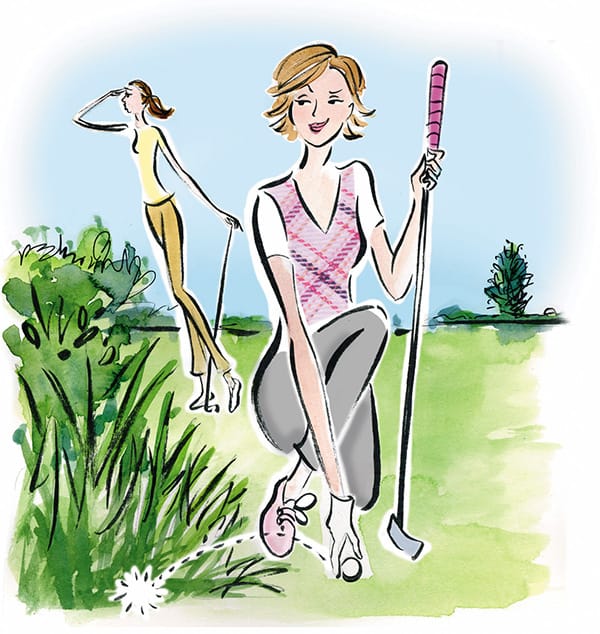 3. You improve your lie.

The Translation: Nudging the ball out of a sand-filled divot, teeing it up on a blade of grass in the rough or moving your ball away from a fence or other immovable obstruction (even if you could nick your new 7 wood) is a strict no-no.

4. Your foursome agrees to ignore a rule.

The Rule: 1-3: Players must not agree to exclude the operation of any rule or to waive any penalty incurred.

The Translation: Your group cannot agree to take a mulligan without penalty and count your score for handicaps. That means no agreement to take breakfast balls, gimme putts or do-overs, even if your league allows it. 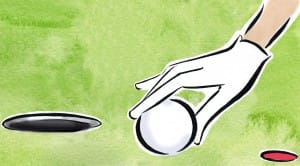 5. You replace your ball about an inch in front of the marker on the green.

The Translation: In the Rules of Golf, replaced means to place it back as closely as possible to the position the ball was in before marked. Replace does not translate to “casually move it up just a teensy-weensy bit.”

6. When taking an unplayable lie, you drop the ball two club lengths from the nearest point you think is playable.

The Rule: 28c: If the player deems [her] ball unplayable, [she] must, under penalty of one stroke, drop a ball within two club lengths of the spot where the ball lay, but not nearer the hole.

The Translation: You take relief where the ball lies, not from the nearest point you deem playable. If you take a drop under this provision, you must measure two club lengths from the ball’s location, even if it means dropping into more trouble.

7. You take a practice stroke during a round.

The Translation: No matter how badly you chili-dip a pitch shot, you cannot drop another ball for practice in an effort to improve your wedge karma (nor can you hit an old ball into the ocean or a vacant lot while you wait in the fairway). The USGA does make exceptions for practice around the green after you’ve holed out.

8. You take a drop in the area near the stake where your ball went out-of-bounds.

The Rule: 27-1: If a ball is lost or out-of-bounds, a player must play a ball, under penalty of one stroke, as nearly as possible to the spot from which the original ball was last played.

The Translation: Stroke and distance. We cannot say it enough. You have to trek all the way back to play from your original spot if you are lost or out-of-bounds, even if the ball trickled out on the tail end of a 220-yard drive. So, in the interest of pace of play, always declare and hit a provisional when your ball could be lost outside a water hazard or out-of-bounds.

The Penalty: Two strokes in stroke play and loss of hole in a match. Note: This breach is almost always ruled “serious” by a committee and warrants disqualification if the player does not go back and play from the original spot with a penalty before she tees off on the next hole.

9. You take extreme measures to improve your stance or lie.

The Rule: 13-2: A player must not improve or allow to be improved the position or lie of [her] ball, the area of [her] intended stance or swing . . . by moving, bending or breaking anything growing or fixed.

The Translation: Leave the pruning shears at home. You can’t dig up plant life or tear down branches to give yourself a clear shot. Nor may you perform circus contortions to avoid unruly vines.

10. You carry more than 14 clubs.
The Rule: 4-4: The player must start a stipulated round with not more than 14 clubs. [She] is limited to the clubs thus selected for that round except that if [she] started with fewer than 14 clubs, [she] may add any number provided her total number does not exceed 14.

The Translation: Most players know this rule but break it unintentionally. Golfers are always adding new clubs for a round to “try them out.” Remember that if you have a few extras in the bag during a round, you won’t be able to submit your score to get your handicap secured before the member guest. 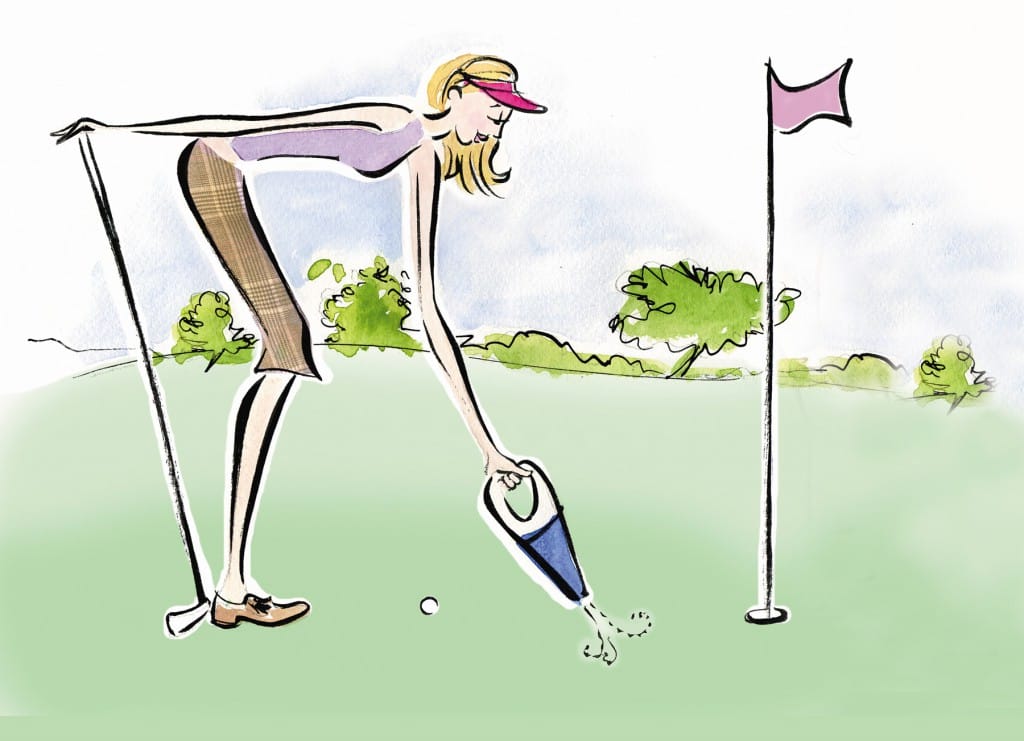 Hitting an Unattended Flagstick with a Putt (Rule 17-3) The flagstick is in the hole, unattended, and your putt strikes it. That’s a 2-stroke penalty in stroke play (ball subsequently played as it lies) and loss of hole in match play.

What am I allowed to use to clean off debris on the green? The restriction on how loose impediments (natural objects, such as stones, leaves, and twigs) may be removed from a line of putt was revised in the 2004 edition of the Rules of Golf (see Rule 16-1a). You can now touch your line with your hand, club, towel, cap, ham sandwich—you name it—in order to remove loose impediments. 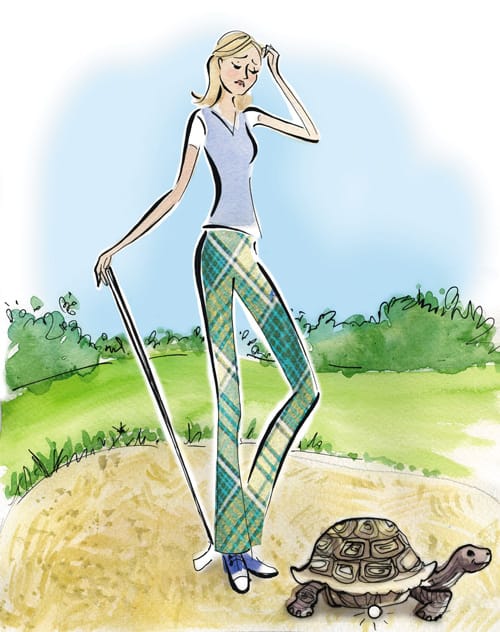 Ball Moves after Address (Rule 18-2b)
If your ball moves once you’ve taken your address, it’s a  1-stroke penalty. The ball is replaced on its original spot.